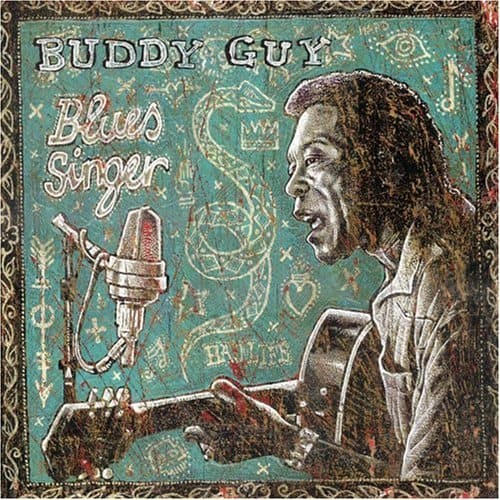 George “Buddy” Guy (born July 30, 1936) is an American blues guitarist and singer. Critically acclaimed, he is a pioneer of the Chicago blues sound and has served as an influence to some of the most notable musicians of his generation, including Eric Clapton, Jimmy Page, Jimi Hendrix and Stevie Ray Vaughan. In the 1960s Guy was a member of Muddy Waters’ band and was a house guitarist at Chess Records. He can be heard on Howlin’ Wolf’s “Killing Floor” and Koko Taylor’s “Wang Dang Doodle” as well as on his own Chess sides and the series of records he made with harmonica player Junior Wells. read more

Not known for his acoustic work, Buddy Guy unplugs for a rare album-length excursion into folk blues. Continuing the rootsy, bare-bones approach that made 2001’s electric Sweet Tea (also produced by Dennis Herring) so gutsy and memorable, the guitarist gets down and dirty with 12 tracks that sound like they were recorded after hours in his living room or on his back porch. Guy’s stinging leads are still evident as is his emotive voice, but both are less flamboyant in the unplugged setting. Accompanied by spare stand-up bass and brushed drums, Guy sounds nearly possessed on covers from Skip James (“Hard Time Killing Floor”), Johnny Shines (“Moanin’ and Groanin’”), Son House (“Louise McGhee”), and John Lee Hooker (“Sally Mae”) among others. It’s a low-key, low-down affair made for late nights, rainy days, and the saddest of moods. Guy is just as convincing here–arguably more so–as on his barnstorming electric albums, making Blues Singer one of the bravest and most poignant albums in his catalog.